This post is a part of a series of posts showing Android implementation of INSTAGRAM with Material Design concept. Today we’ll create user profile presented between the 29th and 33rd second of the concept video.

This is the final effect described in today’s post (for both Android Lollipop and pre-21 versions):

Honestly if you read carefully my previous posts and tried to implement described effects and views, today you won’t learn anything new. Even if the final effect looks very complex almost every used technique or tool were described previously. Actually it’s a good news – the number of different solutions in Android platform is finite. But the way in which you use them is limited only by your imagination. 😄

As always let’s start from adding new elements. We have to create new UserProfileActivity with Toolbar, RecyclerView and FloatingActionButton. Because of custom transition it should use the same style which we used in CommentsActivity. Also we have to add onClick listener to profile photo in FeedAdapter. And by the way I did small refactoring by creating BaseActivity. Here you have list of commits:

First of all let’s start from implementation of transition effect for user profile. As you probably noticed, Material Design introduced fancy circular animation mainly for the reveal effect. Unfortunately for us, the developers, it looks nice in design guidelines, but still we don’t have any good tool for implementing this in the real application. Let’s see the possibilities which we have right now:

We will implement our custom view which can perform circular reveal animation. The requirements are simple:

In our custom view we use ObjectAnimator described in previous post. It animates circle size by setting currentRadius value. For drawing circle we override onDraw() method which draws circle with given radius on given position or fullscreen rectangle if view’s state is finished. Here is the source code for RevealBackgroundView:

What we got here? If Activity is starting, reveal animation runs. Otherwise, if we restoring Activity, background is set to finished state by vRevealBackground.setToFinishedFrame(). RecyclerView with user profile is hidden while reveal animation is running, and is showed when its state changes to STATE_FINISHED (this is done in onStateChange()method). userPhotosAdapter.setLockedAnimations(true) disables profile animations when user starts scrolling or Activity is restoring.

User profile showed in concept video can be splited to 3 main parts:

First of all let’s prepare layout for each of them. Actually it’s nothing special. Here you have screenshots. If you want, just try to reproduce this on your own, or check this commit for the source code. 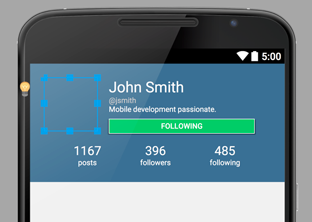 Next we can start implementation of UserProfileAdapter. User profile will be presented byl RecyclerView. First two elements (header and options) should take whole width. Photos should be presented below them in rows with maximum 3 elements inside. That’s why we used StaggeredGridLayoutManager in our Activity. It can define how much elements should contain one row (for vertical scroll) or one column (in horizontal scroll). Also thanks to this manager we can define how much place should take every RecyclerView item.

Let’s start to build our adapter. First of all we have to define items types:

Every type should have his own ViewHolder:

We use them in onCreateViewHolder() method, where we have to inflate our views and setup them for our layout manager:

In lines 6, 12 and 20 by setFullSpan() we can point out which views should take whole row width.

The last thing we should do (before the animations) is binding ViewHolders:

We won’t focus ond bind... methods, but one thing is worth mentioning. For photo loading we use Picasso library. It has one very powerful functionality. We can transform image in the background thread before it will be put in ImageView.

As you probably noticed, user profile photo has circular shaper with white outline. This effect can by simply achieved by image transformation in Picasso, with a little usage of shaders. All we have to do is to implement of Transformation interface which modifies given bitmap. For circular shape we can use shaders (check another Romain Guy’s recipe for simple example of shader usage).
Our code is pretty simple:

Our CircularTransformation draws circle bitmap with the white outline on top of it.

Full source code of UserProfileAdapter described up to this moment is availabe here. And this is the final effect of current implementation: 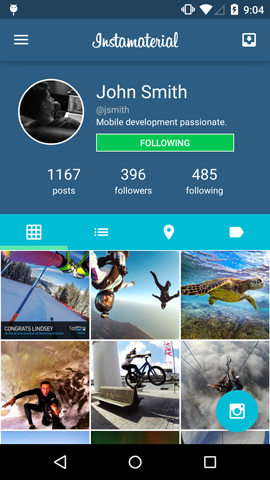 And the final thing – intro animation. On the concept video it looks complex but I think that it is the simplest part od today’s post. Actually all we have to do is to animate each view with ViewPropertyAnimator in the right moment, with the right timing and effects.

Profile header and options animations should be started immediately, so the best moment is a callback from PreDrawListener. Animations are pretty simple – they just change translation or alpha in views. Everything is done in about 20 lines of code:

As I said – the most important things are timings and right moments of start. I this case It is achieved by trial and error method. 😄

A little bit different are photos animations. We are not sure how much time it will take to load them from the Internet, so the best place to run these animations is the moment when the photo is displayed in. Fortunately Picasso has a simple callback with onSuccess() and onError() methods which will be used for firing the animations.
Also we have to consider the second option – when the photo is loaded faster (i.e. from cache), before the profile animation will be finish. In this case all we have to do is a simple logic which calculates proper delay value.
The final code can look like below:

And the full commit with all required changes is available here.

That’s all for today. We’ve just finished user profile with opening transition and all animations. thanks for reading! 😄