JSON – probably everyone knows this lightweight data format used in almost all modern servers. It weights less, is more human-readable and in general is more dev-friendly than old-fashined, horrible xml. JSON is language-independend data format but parsing data and transforming it to e.g. Java objects costs us time and memory resources.
Several days ago Facebook announced big performance improvement in data handling in its Android app. It was connected with dropping JSON format and replacing it with FlatBuffers in almost entire app. Please check this article to get some basic knowledge about FlatBuffers and results of transition to it from JSON.

While the results are very promising, at the first glance the implementation isn’t too obvious. Also facebook didn’t say too much. That’s why in this post I’d like to show how we can start our work with FlatBuffers.

In short, FlatBuffers is a cross-platform serialization library from Google, created specifically for game development and, as Facebook showed, to follow the 16ms rule of smooth and responsive UI in Android.

But hey, before you throw everything to migrate all your data to FlatBuffers, just make sure that you need this. Sometimes the impact on performance will be imperceptible and sometimes data safety will be more important than a tens of milliseconds difference in computation speed.

What makes FlatBuffers so effective?

For the real numbers just check again facebook article about migrating to FlatBuffers or Google documentation itself.

This article will cover the simplest way of using FlatBuffers in Android app:

At the beginning we have to get flatc – FlatBuffers compiler. It can be built from source code hosted in Google’s flatbuffers repository. Let’s download/clone it. Whole build process is described on FlatBuffers Buildingdocumentation. If you are Mac user all you have to do is:

Now we’re able to use schema compiler which among the others can generate model classes for given schema (in Java, C#, Python, GO and C++) or convert JSON to FlatBuffer binary file.

Now we have to prepare schema file which defines data structures we want to de-/serialize. This schema will be used with flatc to create Java models and to transform JSON into Flatbuffer binary file.

Here is a part of our JSON file:

Full version is available here. It’s a bit modified version of data which can be taken from Github API call: https://api.github.com/users/google/repos.

Writing a FlatBuffer schema is very well documented, so I won’t delve into this. Also in our case schema won’t be very complicated. All we have to do is to create 3 tables: ReposList, Repo and User, and define root_type. Here is the important part of this schema:

Great, now all we have to do is to convert repos_json.json to FlatBuffers binary file and generate Java models which will be able to represent our data in Java-friendly style (all files required in this operation are available in our repository):

If everything goes well, here is a list of generated files:

Now let’s create our example app to check how FlatBuffers format works in practice. Here is the screenshot of it: 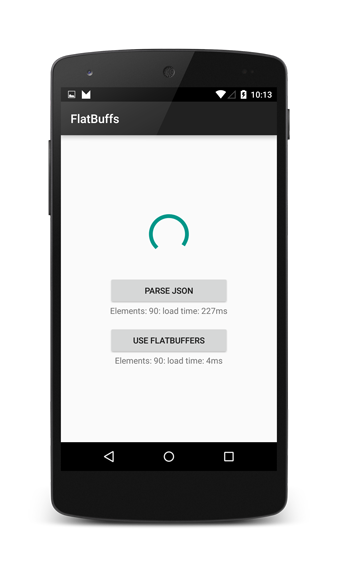 ProgressBar will be used only to show how incorrect data handling (in UI thread) can affect smoothness of user interface.

app/build.gradle file of our app will look like this:

Of course it’s not necessary to use Rx or ButterKnife in our example, but why not to make this app a bit nicer 😉 ?

Here is RawDataReader util which helps us to read raw files in Android app.

At the end put Repo, ReposList and User somewhere in project’s source code.

FlatBuffers provides java library to handle this data format directly in java. Here is flatbuffers-java-1.2.0-SNAPSHOT.jar file. If you want to generate it by hand you have to move back to downloaded FlatBuffers source code, go to java/ directory and use Maven to generate this library:

Great, now all we have to do is to implement MainActivity class. Here is the full source code of it:

Methods which should interest us the most:

Now let’s visualize differences between JSON and FlatBuffers loading time and consumed resources. Tests are made on Nexus 5 with Android M (beta) installed.

Measured operation is conversion to Java files and iteration over all (90) elements.

Remember our 16ms rule ? We’re calling those method with a reason in UI thread. Take a look at how our interface would behave in this case:

See the difference? Json loading freezes ProgressBar for a while, making our interface unpleasant (operation takes more than 16ms).

Whant to measure more? Maybe it’s a good time to give a try to Android Studio 1.3 and new features like Allocation Tracker, Memory Viewer and Method Tracer.

Full source code of described project is available on Github repository. You don’t need to deal with FlatBuffers project – all you need is in flatbuffers/ directory.